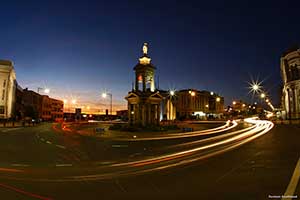 Invercargill City is located in the far south of the Southland region of the South Island of New Zealand. The city is nestled amidst rich farmland and bordered by large areas of conservation land and marine reserves.

Invercargill is home to the Southern Institute of Technology, a polytech that offers a zero-fees scheme to students.

Invercargill has a temperate oceanic climate, with cool summers and cold winters. Winter sees a measurable amount of snowfall, and year round it is one of the more windy and cloudy cities in New Zealand.

Things to Do In and Around Invercargill

Invercargill has lots of things to do - both in and around the city. Some of the popular attractions include the sprawling Oreti Beach, the Southland Museum and Art Gallery that ajoins the Botanic Gardens, and one of Invercargill's latest attractions - the Bill Richardson Transport World. Young and old alike will enjoy the pools and hydroslide at Splash Palace.

Why not take a scenic ferry boat ride out to the barely inhabited island of Stewart Island. New Zealand's newest national park, this beautiful island is an untouched paradise that you can explore by foot, bicycle or even hire a scooter.