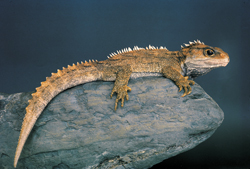 The tuatara is a small reptile resembling a lizard which is native to New Zealand. This survivor of the dinosaur age now only lives in the wild on offshore New Zealand islands.

Tuatara can be viewed at the Southland Museum in Invercargill, Willowbank in Christchurch, Natureland in Nelson, Wellington and Auckland Zoos.

Tuatara are a greenish, brown and gray colour, growing up to around 80 centremetres from head to tail-tip and weighing up to just over 1 kilogram.

Tuatara are recognised by their a spiny crest along their back, which is especially pronounced in males.

Mostly nocturnal, the tuatara - like lizards - will bask on rocks in the sun during the day. They are very slow growing, take 2 to 5 years for each reproduction cycle, and live for a very long time.

The museum is home to around 80 tuataras in their enclosure.

The tuatara now only live in the wild on offshore New Zealand islands in the Cook Strait, and off the North Island's east coast. Rats are a threat to the tuatara - stealing their eggs.

The Department of Conservation has conservation efforts which work to study and understand the tuatara. They work to keep existing habitats free of rodents and re-introduce tuatara to new, rodent-free islands.