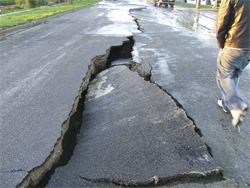 At 4:30am on 4th September 2010, a massive earthquake registering 7.1 on the Richter Scale hit Christchurch City and the surrounding Canterbury region of New Zealand.

The earthquake caused many millions of dollars of damage to buildings, items, stock, land and roads.

Many people have been left homeless after being forced to move out of their homes; homes that have been condemned due to quake damage.

Several hundred tremors have subsequently hit Christchurch, and the surrouding area. The tremors are continuing to cause damage to buildings, land and roads.

The quake, and its many aftershocks, have been listed as the most expensive New Zealand disaster in recorded history.

Residents of the small town of Darfield were hit hardest, with buildings crumbling, sand rising from beneath the earth, and services such as power and water being cut off. Much of the Christchurch CBD suffered the same fate, with older buildings and brick chimneys down all over the city.

The suburb of Avonside was hit hard, with the earth moving and cracking. Large cracks have appeared throughout the neighbourhood, splitting roads, bridges and houses apart.

The suburb of Bexely was also hit hard. Many properties in this suburb have sunk and been flooded by burst sewage systems.

Check out the current tremors and quakes at the GeoNet website.

A magnitude 4.2 earthquake struck at a depth of five kilometres, within five kilometres of Christchurch, at 2.07am on 26/12/2010. The large aftershock was followed by a series of small shocks between magnitudes 2.7 and 3.8 before another large 4.9 jolt at 10:30am the following morning. Power was cut to central Christchurch, and people were sent running as bricks, glass and other other debris came tumbling down.

Luckily there were no reported injuries.

How You Can Help

New Zealand, and indeed the entire world, has rallied together to help sort our crisis. Many university students and others who cannot currently return to school or work are volunteering to help with the community clean-up.

If you cannot physically help, then you can help by donating now to the Christchurch City Mission, or one of the many other charities set up to help Christchurch.

It is going to take many years and lots of hard work to restore our beautiful city, but together we can do it!

You can make a donation by going to the Christchurch City Mission website.