Ruapehu is a district located in the central North Island of New Zealand. The main settlements in the Ruapehu District are the ski towns of National Park and Ohakune, the army town of Waiouru and the rural service centre of Taumarunui.

Ruapehu is a popular tourist destination, with a huge range of activities including hiking, fishing, kayaking, canoeing, horse riding and mountain biking. 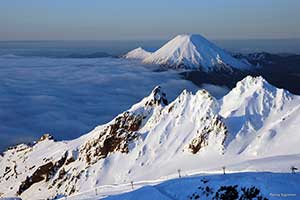 Ruapehu is the largest active volcano in New Zealand and the highest point in the North Island. Tahurangi, Te Heuheu and Paretetaitonga are the highest peaks.

There are many parks, gardens, historic houses, museums and other places of interest in and around Ruapehu, New Zealand.