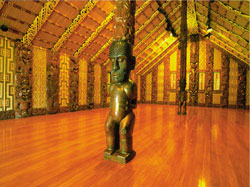 The Maori are the indigenous people, or tangata whenua, of New Zealand. The origin of the Maori people has been traced to the islands of Eastern Polynesia from which they journeyed to New Zealand on canoes many hundreds of years ago.

The Maori culture is rich in tradition and legend, and forms an integral part of New Zealand society.

Maori tourism is a growing industry throughout New Zealand, with large influences in the North Island. In Rotorua you can visit a unique Maori village and try Maori food, or kai, cooked underground on hot stones, known as a hangi. You can watch traditional dances, visit a local marae and much more.

Read facts about the Maori people. 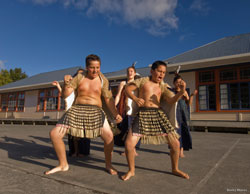 The Maori have a rich culture, steeped in tradition and legend. Legend is passed down through the generations by story telling - stories that tell of the creation of the islands of New Zealand and much more.

Maraes, (communal "plaza" areas where the Maori people meet), provide a focus for social, cultural and spiritual life within the Maori community. The Marae includes a wharenui (meeting house) and wharekai (dining room).

Maori people define themselves by their tribe, or iwi. Family is very important within the Maori culture, and encompasses immediate family, in-laws and all those connected by blood ties.

Dance for the Maori people is a very important part of their culture. Kapa haka (Maori performance art), incorporates singing, dancing and facial expressions. Each action within the dance has a meaning, tying it to the words. The traditional Maori war dance, known as the haka, is performed by the All Blacks (our National Rugby Team), before each game.

The Maori language is unique, and while its knowledge was lost from many for a while, it is now promoted and encouraged in New Zealand.

Maori is the official second language of New Zealand, and the basics are taught in most schools.

Find out more about the Maori language.

The Maori are believed to be the indigenous people of New Zealand, immigrating here from Polynesia on canoes many years ago. This event was known as the "Great Fleet".

These polynesian people settled New Zealand and became known as the Maori. They formed their own unique culture, language and traditions.

The Maori hunted the variety of birds and fish they found around New Zealand, and favoured the warmer climates of the North Island.

Land wars broke out with the arrival of the European settlers. In 1840, the Treaty of Waitangi was written and signed by several Maori Chiefs which gave the British monarchy sovereignty over parts of New Zealand. Confusion has long remained over what the treaty actually said and meant, as the Maori version translates differently to the English version. The Maori believed they retained the rights to their land.

Find out more about the Maori history.