The Maori history is an epic journey, filled with rich mythology, a unique culture, and early trible warfare.

Their journey began some 700 years ago when Polynesian voyagers are believed to have migrated from eastern Polynesia in their canoes to the land that became known as New Zealand.

The Polynesian settlers were very isolated in New Zealand for several centuries and developed their own unique society and culture - which became known as Maori.

Maori history is steeped in legend. Their legends record that Chief Kupe arrived in New Zealand around 950 AD. He traveled from a mythical homeland called Hawaiki, in a canoe called the Maataa-hourua. He is said to have landed near Wellington in a place called Whanganui-a-tara and when he first spotted the land he said, “He ao, he aotea he aotearoa” (It is a cloud...a white cloud...a long white cloud). New Zealand then became known to the Maori as Aotearoa.

The early Polynesian settlers settled along the coastlines of New Zealand, especially the east coast as the weather is more hospitable and temperate.

There are no mammals native to New Zealand – with the exception of bats and marine mammals. The Maori introduced a few new animals such as dogs and rats, however they suffered a lack of animals to hunt for food. Their primary diet consisted of fish and birds – including the Moa. The Moa were a large flightless bird, ranging from the size of a turkey to over three meters tall and weighing up to two hundred kilograms. The Moa were hunted extensively for food. The bones were used to create weapons.

The Maori spread throughout New Zealand, forming many clans. They produced beautiful works of art, and use tattooing extensively. Wars between tribes was common and was normally over territory. Maori warriors were fierce in battle and the fate of their enemies, when captured, usually involved being eaten or having their heads shrunk as trophies. 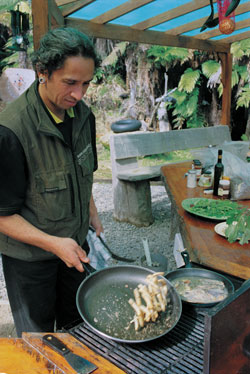 In 1642, Dutch explorer Abel Tasman first recorded sighting New Zealand, but did not land nor colonise the land. It was not until 1769 that the first Europeans landed on the shores of New Zealand.

In 1769, a young boy named Nick Young, aboard a British exploration ship, sighted the East Cape of New Zealand. Explorer Captain James Cook landed, and charted New Zealand. By 1779, the British East India Company had extended their charter to include New Zealand.

The waves of arrivals caused inevitable land wars and fights between the Maori and the settlers. In 1840, the Treaty of Waitangi was written and signed by several Maori Chiefs which gave the British monarchy sovereignty over parts of New Zealand. Confusion has long remained over what the treaty actually said and meant, as the Maori version translates differently to the English version. The Maori believed they retained the rights to their land.

In 1845, a Maori chief called Hone Heke headed an uprising on the North Island. The uprising marked the start of the New Zealand Wars. He was defeated in 1846, but racial tensions continued. In 1858, to symbolize their unity, several Maori tribes joined to choose Chief Te Wherowhero as their king. In 1860 war ensued once more and spread through the North Island. The fighting continued off and on until 1872, when the Maori leader Te Kooti was forced to retreat. He withdrew to a remote area of the island, where the British troops decided not to pursue him.

Weakened by war and disease, the Maori population declined radically. However as civilisation in New Zealand improved, along with health and education, the Maori birth rate began to climb.

Today the Maori culture, language and traditions are celebrated and promoted throughout New Zealand. The treaty is remembered every year with a public holiday, and the traditional Maori war dance the haka is performed before many international/national events. Our national anthem is normally sung in both English and Maori.