The kaka is a lively native New Zealand parrot that lives in lowland and mid-altitude native forest. The kaka, also known as kākā, are relatively common in the forests of Fiordland and Stewart Island. 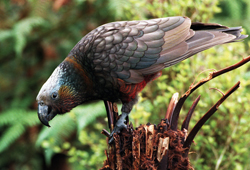 The kaka's cry is harsh and is similar to its name.

Kaka eat nectar, fruit, grubs and seeds. They obtain the nectar from flowers by using their brush tongue, and use their strong bill to open the tough cone of the kauri to obtain the seeds. They also use their bill as a "third leg" to help them climb trees to reach food.

The kaka make their nests in hollow trees, laying clutches of 2 to 4 eggs in late winter. The eggs then take three weeks to incubate. Once the eggs have hatched, both parents help feed the chicks. Their chicks remain in the nest for two months, often leaving before they can fly. This makes the chicks vulnerable to ground-dwelling predators such as stoats and cats.

Kaka numbers are threatened by a range of factors. Habitat loss from forest clearance have had a devastating effect. Possums, deer, pigs and wasps have had an effect on the supply of food.

The Department of Conservation has established a national project to co-ordinate the recovery of the New Zealand kaka parrot. This project aims to maintain a viable population of South Island kaka in the beech honeydew forests of the northern South Island, and to study the effects of pest control on North Island kaka in the Waipapa ecological area, also with the aim of maintaining a viable population within a central North Island podocarp forest.

Find out more at www.doct.govt.nz.