The kiwi is a native New Zealand bird that lives in the forest. This flightless, nocturnal bird is the national icon of New Zealand and a very important part of our culture. In fact, New Zealander's are affectionately known as "kiwis". 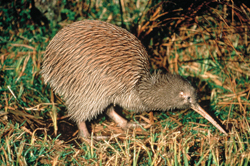 Kiwi are a unique bird, with many characteristics found only amongst the kiwi species.

Kiwi have long bill beaks, with nostrils at the end of them. The birds forage along the forest floor, digging into the earth and sniffing out invertebrate to eat.

Kiwi generally mate for life, and it is the male which incubates the eggs. Kiwi eggs are very large in proportion to their bodies, in fact each egg is around 15% of the mother's weight!

Younglings hatch and emerge from the nest a few days later to forage and feed. The mother and father never feed their chicks, so they must learn to feed themselves.

Kiwi numbers are small, and have suffered over the years from habitat intrusion, but more significantly, from predators.

Predators of the kiwi are introduced animals, such as cats, dogs and stoats. These predators will kill both younglings and adult kiwi.

If you live near to kiwi habitats, it is important that you keep your cats and dogs away from them. Even hunting dogs will often kill kiwi. The kiwi are easily hurt, and even a small bite can kill them.

The Department of Conservation has set up 5 kiwi conservation projects, each aimed at furthering the study and understanding of these birds as well as increasing their numbers.