The weka is a flightless native New Zealand bird that lives in forests, sub-alpine grassland, sand dunes, rocky shores and modified semi-urban environments. The weka are known to be cheeky, and steal food and shiny objects left out by unwitting campers and travellers. 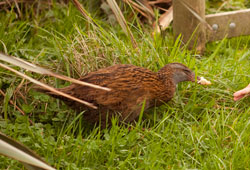 The weka is a strong brown bird that grows to about the size of a chicken. There are four sub-species - the North Island weka, the Western weka, the Stewart Island weka and the Buff weka.

Weka make their nests are on the ground, hiding them in thick bushes or under logs. Their nesting season is usually between August and January. Both parents help to incubate the eggs, and may lay up to 4 broods in one year. When the chicks hatch, the weka will protect them fiercely - fighting off any predators.

Weka are omnivores and eat just about everything, including insects, slugs, frogs, lizards, rats, mice, eggs, small birds and they also enjoy leaves, berries and seeds.

Weka numbers are threatened by a range of factors. Habitat loss from forest clearance, habitat changes, disease and pest control operations have had an affect on weka numbers. Ferrets, cats, stoats and dogs are their primary predators.

The Department of Conservation supports and promotes the conservation and protection of the weka. They are working to recover the weka numbers as well as to learn more about this cheeky bird.

Find out more at www.doct.govt.nz.