Otago: About | Attractions | Things to Do

There is much to see in the Otago region, from coastal attractions to powerful inland landscapes of mountains, rivers and gorges. Visit the Royal Albatross Centre at Taiaroa Head - the only mainland breeding colony of Royal Albatross in the world.

The Otago Central Rail Trail, (also known as the Central Otago Rail Trail), is an old abandoned railway track that runs from Clyde to Middlemarch. Accessible all year round, the trail is a public reserve which has been specifically created for mountain bikers, walkers and horse riders. Motorised vehicles are not permitted on the trail.

The rail trail winds through spectacular scenery including mountain ranges, hills and gorges, the Maniototo plain, old gold mining towns, and the fruit growing areas of Central Otago. Viaducts, bridges and some of the old Railway Stations have been preserved and can also be viewed along the trail. Towns along the trail include Clyde, Alexandra, Chatto Creek, Omakau, Lauder, Oturehua, Wedderburn, Ranfurly, Waipiata, Hyde, Middlemarch and Dunedin.

At around 4 hours of cycling a day, the entire trail can be biked in about 4 days. If you are walking it, then you would need to allow a few more days. The hills along the trail are not steep, making it accessible to most ages and those with a reasonable degree of fitness. 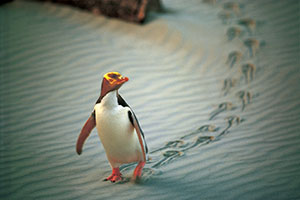 The Otago Peninsula is a long, hilly peninsula located east of Dunedin City. The peninsula is home to a wide range of birds, animals and sea life such as seals and yellow-eyed penguins.

Taiaroa Head is located at the entrance of the Otago Harbour and is home to a breeding colony of Northern Royal Albatross - the only colony of albatross to be found on an inhabited mainland.

Central Otago is a powerful place, brimming with history, scenic landscapes and orchards. Explore Old Cromwell Town - relocated from the old site of the town to the current site to make way for a dam. Gold mining history is rich in these towns, evidenced in the heritage buildings and old gold mines. For some delicious fruit, try picking your own direct from the fruit trees. Award winning wines are produced here, including Pinot noir, Chardonnay, Sauvignon blanc, Merlot, and Riesling.