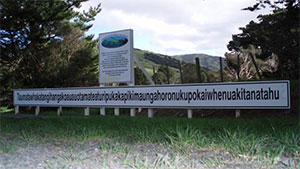 The Maori place name translates into English as "the place where Tamatea, the man with the big knees, who slid, climbed and swallowed mountains, known as 'landeater’, played his flute to his loved one".

The sign makes for a great photo opportunity, however permission is required to walk to the actual hill as it is on private land.