Played in New Zealand as far back as 1870, Rubgy Union is popular across all ages, sectors and races. Generally referred to as simply "Rugby", Rugby Union is an important part of our culture. The top domestic competitions are Super Rugby, ITM Cup and the Heartland Championship.

Our provincial teams include:

The All Blacks are our national rugby team, and are one the best rugby teams in all of the world!

Tana Umaga, with his trademark dreadlocks featured in the image to the right, is one of many New Zealand Rugby legends. He had been described as one of the best All Black three-quarters either as a wing or a centre. Tana Umaga captained the All Blacks in 21 tests, played in 74, and scored 185 points. He hung up his boots after playing his 100th match for the Vodafone Wellington Lions against the Manawatu Turbos in the Air New Zealand Cup, August 2007.

The All Blacks traditionally perform a haka, a Maori challenge, at the start of international matches.

Super Rugby is the largest and pre-eminent professional rugby union competition in the Southern Hemisphere. The competition includes teams from Australia, New Zealand and South Africa.

New Zealand teams in the Super Rugby are: 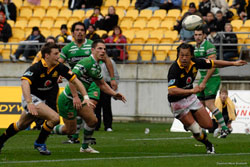 The ITM Cup consists of 14 teams from regions throughout New Zealand.

Each team must have 26 players to compete with. Teams include:

The Heartland Championship is a domestic rugby union competition in New Zealand, held annually and starting in August.